The WireEye series of carabiners combines the utility of a standard carabiner with the safety and capability of a lanyard pin or captive eye. The WireEye holds gear, lanyards and lines with enough resistance to help prevent gear from moving past the end of the carabiner, but releases easily when lifted up. When the potential for dangerous leverage or cross-loading can occur, the WireEye helps keep the carabiner oriented correctly, and the gear where it belongs.

5 in stock (can be backordered) 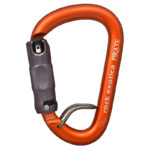