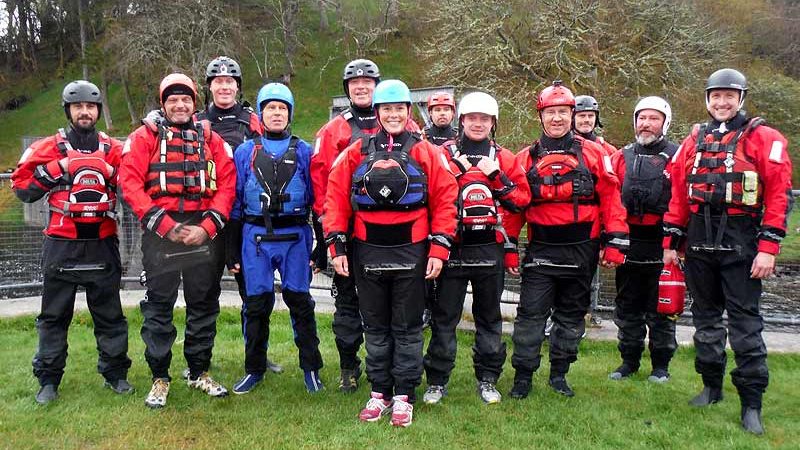 The last time I attended a white water safety and rescue course was about 8 years ago and I thought it was high time to refresh my skills and spend the weekend swimming down a cold Welsh river! It turned out I was the only one who had been on a course like this before with the majority of the group being fairly new to white water, what a treat they were in for!

So after an utterly crap drive up the M40 on the bank holiday weekend with accidents everywhere and plenty of traffic, we made it up to the Tyddynbychan bunk house where some of the guys had left us diner (Sheppard’s pie, followed by apple crumble and custard) – ace!

With an early start we drove the short distance to the Afon Tryweryn to sign in and get kitted up in warm gear and dry suits. Some of the team opted for more warm stuff than others and this ranged from 3-4 layers to a measly 1 thin set of thermals (some were obviously colder than others!) I found that a set of thermal top and bottoms plus a thin fleece bear suit and neoprene skull cap was just about right (not to cold for standing around in, but suitably warm and giving enough movement for swimming down the river!)

After a short introduction to the course and a briefing on the hierarchy of danger:

We took to the water. First we learnt how to swim through the rapids defensively on our backs with our feet out in front while doing back stroke. Then it was learning how to swim offensively using a corkscrew roll technique to get out of the main flow and to the safety of an eddie.

After this it was time to swim down small drops tucking into a ball and then learning how to swim/glide across stoppers adopting a parachute free-fall position. This was probably one of the most eye opening parts of the course and filled everyone with confidence.

Next it was throw line practice – perfecting overarm and underarm throws and looking at the different options for reeling in the swimmer and getting them into the eddie. We worked on our own, in pairs, and then in groups in a variety of situations.

Just before lunch we got to experience what it would be like to get stuck on tree (strainer) and how to deal with it. We were first asked to swim down in a defensive position and get stuck on the tree (a large brown tube) held in place with a releasable rope system. After trying for nearly a minute to push myself against the water and climb on top of it I had to admit defeat and if this was a real situation I probably would have drowned.

Our next attempt was to swim at the tree head-first doing an aggressive front crawl, just as we were about to hit the tree with had to push down on it and get our chest up and over it. This is easier said than done, but works extremely well and is your only defence again a tree hazard.

After lunch it was time to get back in the water and set up live-bait scenarios. Live-baiting is where you have no choice but to get in the water attached to the end of the line and grab an injured or unconscious swimmer before they disappear off down stream and come to more harm. This is a great way to cause chaos and there were a few interesting techniques being developed by the other team – who it turned out had on occasion accidentally taken to punching the casualty in the face whilst attempting to rescue them! Tensioned diagonal lines can be used to get people and equipment across the river.

The last action of the day was to set up a tensioned diagonal line across the river to transfer equipment and people back across the side they needed to be. This was set up as mini scenario and we were able to watch the other team having fun trying to throw ropes across the river and tie knots before trusting their set up and jumping in. For a first attempt and with no prior knowledge they did extremely well.

The morning consisted of effective group padding, management and planning, learning how and when to run rapids as small groups, individuals and in pairs. Once the basics were mastered we looked at rescuing swimmers from the boats and towing them to safety.

After this we practised setting up various chest lines for swimmers with foot entrapments and how to free pinned boats using pulleys systems and vector pulls.

After lunch it was time to put all the skills together in various scenarios with only split seconds to react to an incident, decide on a plan of action and carry it out.

On the whole our casualty was rescued fairly quickly with only minimal fuss and confusion. Sometimes this was achieved by carrying out two different rescues simultaneously with one being the back up if the first failed. This was the luxury of the training environment and having enough people with the right set of new skills and throw bags on standby.

When paddling rivers events can often happen in a instant and when you least expect it. This kind of training really helps you to plan and prepare for such incidents and gives you the confidence to deal with situations when they arise. An absolute must for anyone into their white water kayaking!

Big thanks to Tryweryn white water centre in North Wales and the Martlet Kayak Club, Brighton.