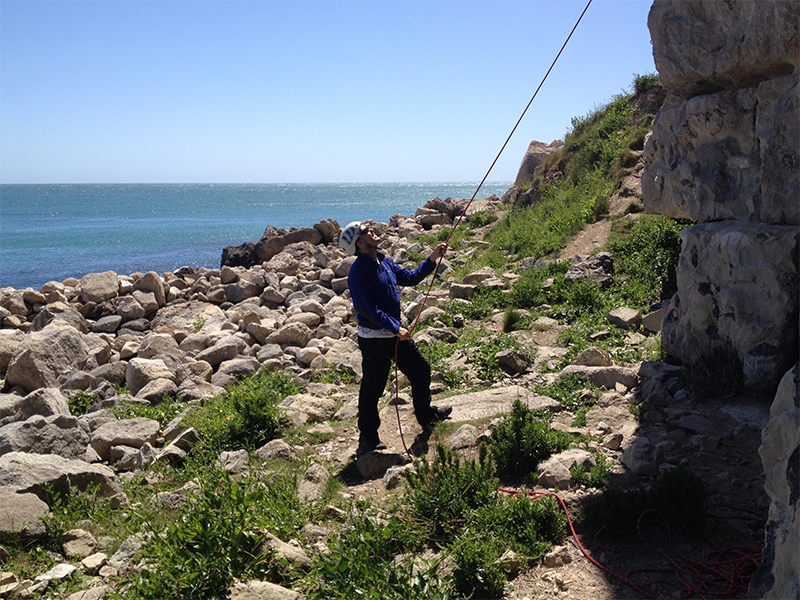 A few of months ago we were asked to source a location, a climber and riggers to film a Subaru advert. The day went well and the shoot was completed. The media company BJL were extremely pleased with the advert, however they wanted to make a more dramatic fall at the end of the sequence and shoot it from more angles, so they asked us to head back to Portland to spend the day not climbing, but falling!! This time we decided to head to Neddyfileds on the East Cost as this was similar in aspect and scenery to the Cuttings where we’d previously shot, but this was more overhanging for our fall shots and allowed for a great vista in the background.

Upon arrival we were slightly worry about the amount of ‘group’ ropes already in situ, however we found the area we were planning was empty and the groups were far enough around the corner that they wouldn’t be in shot. Portland climbing.

We got straight on with the action, first rigging an ascent line for the camera man (Tom) and while this was going on Henning got warmed up and started working on the moves to the drop point. When everyone was in position and the GoPro’s were up and running, it was time for the first fall. After this was out of the way, we increased the drop size and marked the ropes to ensure similar drop heights each time. We filmed a wide range of angles and all in all Henning must have made about 10 drops.

Below hear from Henning about the fear of falling: Once we got there, chose a route for the shoot and started setting up, I started feeling a bit nervous about the big falls I was about to take. In climbing you gradually build up a relationship of trust between you and person you climb with regularly and on this occasion I wasn’t being belayed by someone I had climbed with loads before. However, Kyle was on belay for the shoot and although he had only ever belayed me on one occasion, (the day of the previous shoot) I knew I could trust him but I couldn’t help but be a bit nervous. TV and Film safety rigging in Portland.

Once we got going and I took a couple of falls I was getting more comfortable and I could relax a bit more. I take big falls indoors on a regular basis and don’t mind it much, but taking big falls outdoors is always much more exhilarating. After a few big drops I was now properly rushing on adrenaline and enjoying the experience more and more.

With Tom hanging on a rigged rope next to me, we were shooting from lots of different angles and heights to get the perfect shot for the advert. After getting a few good shots of the falling, the director wanted a shot of a climber being lowered down quickly and stopping a couple of meters off the ground.

We decided to put a knot in the dead rope to make sure I didn’t end up on the ground when I was lowered down that fast. We were all set to go. I climbed back up and on cue, Kyle tried lowering me down fast as he could and as calculated, I stopped a couple of meters off the ground. The director was not happy with the speed at which I was coming down so our only option was for Kyle to completely let go of the rope so I could drop down faster and stop when the knot jams in the belay device. This is something I have never done before so needless to say, I was quite nervous.

We re-calculated to make sure the knot was tied at the right height so I would not end up on the ground. So up I climbed again, reassuring myself that we had checked and calculated everything correctly and that I would not end up hitting the deck. The countdown started and on cue I let go and dropped down stopping two meters off the ground as calculated. I sighed with relief and looked at the director for approval. Instead of a nod of approval, he asked whether there was any way to speed up the drop as it still was not fast enough. Sport lead climbing in Portland, Dorset.

After a bit of thought, we decided to put a pulley up at the top for the rope to run through, reducing the friction and ultimately dropping me at a faster speed. With everything in place, and once again a slightly nervous me waiting at the top, Tom counted and I dropped down. This time much faster than ever before! The first couple of drops were scary and exhilarating but then I could start enjoying the buzz again until we finally got the ‘OK’ from the director to say he was satisfied and got the shot he wanted. Abseiling at Neddyfields in Portland.

After all the exciting shots, falling off more times than I normally do in a month, we only had a few easy ground based shots left to do to wrap up the day. We quickly got these out of the way and had a bit of time to spare in the afternoon. We even managed to convince the director to have a go at climbing and abseiling before we packed up and headed back to Brighton.

By Tom Hatt and Henning Muller