Volume 1 of Scottish Rock covers a proliferation of Scottish crags up to the natural demarcation of the Great Glen. They are easier to access than most in Volume 2 and present infinite variety. There are selected climbs in Arran, Arrochar Area, Mull & Iona, Glen Coe & Glen Etive, Ardgour & Ardnamurchan, Ben Nevis & Glen Nevis, Central Highlands, Cairngorms, Easter Ross.

New to this second edition are numerous grade adjustments, improvements in descriptions, some topo corrections and new topos. Several less popular crags and cliffs have been removed, freeing up space for the inclusion of over 120 additional routes. There are also over 60 new photos.

From the foreword by Hamish MacInnes:-

“If you have an ambition to do all the climbs in these two Scottish Rock guides I think you’d better schedule time off in your next life. This labour of Gary’s has been of gargantuan proportions. Those of you who use the guides will benefit by his dedication and the sheer choice offered; if you divide the retail price of these by the number of good routes you’ll realise this is a bargain.”

The author has been a long-time advocate of selected climbs and the use of photographs to illustrate both climbs and action and this principle has been used throughout these two volumes. It gives the climber a push to get up and do things. The list seems endless and if you succeed in doing half of them you’ll be a much better climber and know a lot more about Scotland – have a good decade!

A native Scot, Gary Latter has climbed extensively throughout Scotland for over three decades, pioneering hundreds of new routes of every standard throughout the Highlands and Islands, including major new routes and early repeats in all the major climbing areas throughout the country. During the dozen or so years researching and compiling these guides, he has personally visited and climbed on almost all the crags and cliffs documented, amassing an extensive collection of photographs along the way. 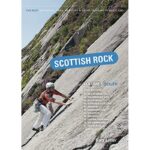