How to Tie a Bowline 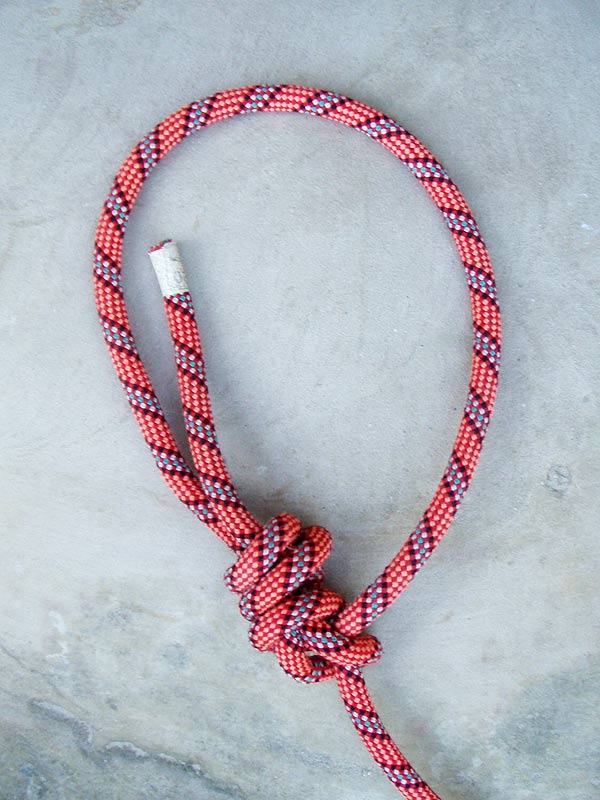 Create a loop (some people refer to this as the ‘rabbit hole’), then continue in the same direction as if you were about to create a bigger loop.

Now pass the rope through the loop again and pull tight. This completes the Bowline. If we’re talking rabbits; then the rabbit has come out of the hole, around the tree and back down the hole! A point to note is that it doesn’t matter which way around the main rope (tree) the rope (rabbit) goes, this just effects whether the end of the rope sits inside or outside the main loop. In our picture it sits inside the main loop.

When using a bowling for rock climbing purposes it MUST be finished with a stopped knot, as with loading and unloading of the bowline can cause it to creep and come untied. The most common method is by tying a double stopper knot. Note how the stopper knot is butted right up against the bowline.

The bowline with a stopper knot is fairly commonly used throughout Europe as the main knot for tying in a climber but less common in the UK.

Quick and easy to tie especially around large anchors and has the distinct that its easy to untie after heavy loading. It is a very simple to learn and easy to recognise once tied. It will also stay tied even with fairly stiff rope. It is also a relatively strong knot, and in test its breaking strain is varies from 66-77% of the ropes full strength.

It can take people a little while to master tying this knot and is not as easy to identify at a glance as the figure of 8. It is also imperative that its used in conjunction with a stopper knot. Although its one of the weaker knots (55% to 74% strength is loss in the rope when tied) its more than strong enough for recreational climbing uses.