Night Kayaking on the River Ouse 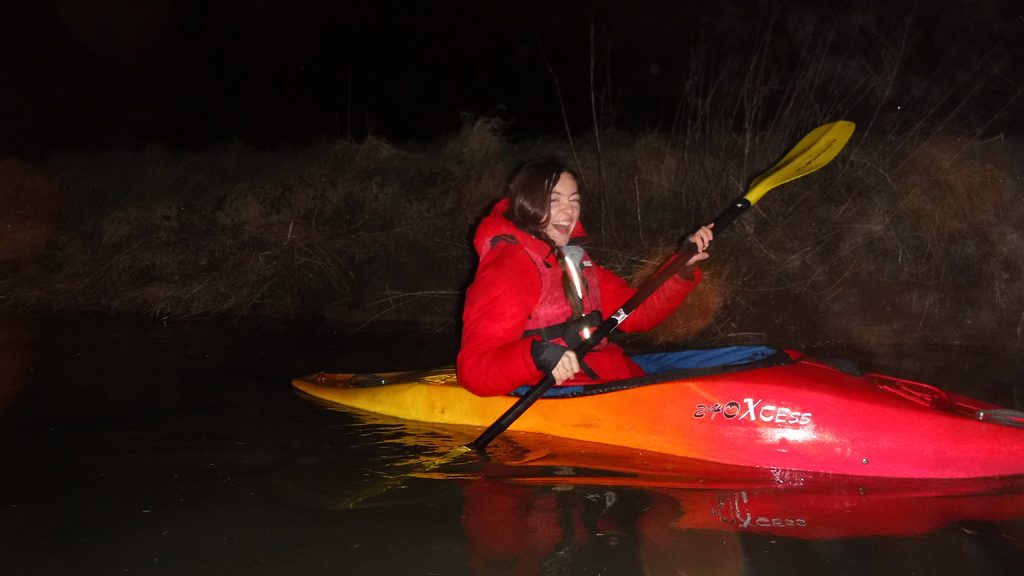 We set off in the van and reached Barcombe Mills at dusk. Our plan was to recce the river at night in order to run guided trip for clients in the future. My kayaking skills were as close to zero as they come, down to not knowing the difference between a paddle and an oar. The section of the River Ouse we’d set our sights on is non-tidal, making it an ideal playing field for beginners such as myself.

Tom gave me the low down on how to get into my trusty vessel, how to put on a spray skirt (aka the funniest-looking item of sporting equipment you’ll ever see), how not to paddle in circles, and what to do in the event of capsizing.

“Did you say capsizing?” I’m pretty sure this last word came out as a high-pitched squeal. Despite being a pretty mild evening, it was still March in East Sussex. My only knowledge of the River Ouse was that Virginia Woolf had drowned herself in it and I resolved there and then that I’d get back to the van as dry as I had left it.

After the first few awkward attempts, I was soon gliding across the water in something that could be mistaken for a straight line. It turns out that paddling doesn’t have to be hard work, particularly when there isn’t a current to fight against. A few calm strokes are enough to keep up a good pace, with plenty of breath left for a good natter.

Tom’s fun fact of the night: it takes 45 minutes for your eyes to adjust to the darkness and for night-vision to kick in. Just 4 seconds of exposure to artificial light are enough to set you back to square one. As the last remnants of daylight disappeared and the crescent moon came into view, I was surprised to discover how much I could see on the water in what I’d normally consider to be pitch black darkness.

We paddled past a bevy of sleeping swans, Tom pointed out a gaggle of geese, and we nearly speared a lone duck with our kayaks. Aside from the poor bird’s quacking, the only noises on the river came from the paddles cutting into the water and our constant exchange of anecdotes, facts & low-brow banter.

We reached our destination, the Anchor Inn, hoping for dinner and a pint of Guinness. Instead, we were greeted by a mostly naked landlord armed with a flashlight who shouted from a top floor window that they wouldn’t be open for evenings until July. Ah, quiet rural life!

Launching back into the water from the raised riverbank while strapped into our kayaks was risky business. Tom whipped out the camera in gleeful anticipation of my first capsize but the Gods were in my favour and I somehow made it back to the water on top, ready for the return trip.

Remember “Tom’s fun fact”? It turns out that camera flash is like kryptonite for night-vision. Which explains why I hugged* (crashed into) every tree, branch and twig that leans into the River Ouse, from the Anchor Inn all the way back to Barcombe Mills. Any suggestion that this was, in fact, down to my lack of kayaking skills and dismal fitness levels is pure fabrication. #fakenews

We paddled back via a slightly different route, through a narrow passage that was the stage of the infamous “fish incident”. Should you ever go on a course with Kyle, I highly recommend that you ask him about this. Preferably before eating any lunch.

During our many chats, I found out that Tom learned deaf-blind signing while working with Blind Veterans UK many moons ago. I thought of a quote by the deaf-blind author and allround badass Helen Keller:

“Life is either a daring adventure, or nothing.”

I’ve always considered myself a fairly adventurous human but as we climbed back into the van, I tried to remember: when was the last time I’d tried something so outrageously bonkers as kayaking by moonlight?

This trip has made a lasting impression for three reasons. First and most obvious, kayaking at night is crazy exciting. Secondly, Tom’s company and teaching talent really are second to none. Last but not least, it has made me reflect on the importance of doing things outside of my comfort zone. What’s the point of life if not to challenge yourself and redefine your boundaries?

I feel more inspired than ever to say yes, take on new adventures and make more memories. The gauntlet has been thrown, Tom: what on Earth will you come up with next?